Why I Didn’t Watch The George Zimmerman Trial | VALID | #TWIBnation 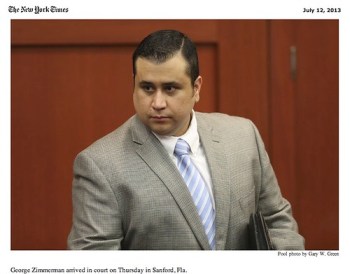 Thursday morning, as Judge Debra S. Nelson decided whether the jury in the George Zimmerman murder trial would be allowed to consider “lesser included offenses” like manslaughter, my 17-year-old son lay stretched out on the living room couch, one eye on a television show and one eye on the screen of his mobile phone, scanning text messages from his friends. A short time later, he showered and headed off to his part time summer job in the information services department at the local high school.

My biggest concern was whether he left his dirty clothes in a pile on the bathroom floor. He did not.

Later in the day, he meandered home from work. As he often does, he caught up with one of his friends on the way home, and so his path from there to here was circuitous. He stopped at a convenience store to get a snack along the way.

My biggest concern was whether he would make in home in time for dinner. He did.

He’s a good kid. His grades aren’t great, but he’s smart and funny and has an enormous heart. He’ll get ahead in life because he likes people, he knows how to communicate, and he has a good attitude.

He’s going to be a high school senior in the fall.

After that, of course, my biggest concern will be how to pay for college.

What I’m not likely to be concerned about at any point along the way is this: My son, walking home on the streets where he belongs, being confronted by some random 29-year-old with a Barney Fife complex – only with a round in the chamber instead of in his breast pocket – and an ensuing struggle, a shot being fired, and my son bleeding out on the pavement. I’m not saying that it couldn’t happen. I’m saying the risk of that happening to my son is pretty slight. Even though we live just a short distance from Chicago’s west side.

I haven’t been able to watch the George Zimmerman trial play out on television for a host of reasons. Partly it’s because I have a son who’s 17, the same age Trayvon Martin was the day he was shot and killed, and another son who’s going to be 15 this weekend. Partly it’s because I had to watch my mother and father bury my brother John in 1991, and my mother, then a widow, bury my brother Tom in 2009. So, I have an inkling of what it must’ve been like for Trayvon Martin’s parents to bury him. Except that my brothers at least had the chance to live to adulthood. John was just shy of 36 when he died; Tom was 51 – still way too young to die, but not fucking seventeen.

But mostly I haven’t been able to watch the Zimmerman trial because of the underlying premise of the defense: Not that it was some horrible, but justifiable, mistake; but that Martin somehow deserved to die that evening in February 2012. That even though Zimmerman accosted Martin – a 17-year-old kid, fer Chrissakes – in a place where Martin had every right to be, Martin is to blame because he fought back.

Trayvon Martin was not in the wrong place at the wrong time. He was heading home to his father’s house. He had every right to be in that place at that time, and nobody – certainly not an adult who was a stranger to him – had the right to stop him, demand answers from him, follow him, badger him, or engage him in any sort of physical conflict whatsoever. So I don’t give a good goddamn who punched whom. I don’t care what he was wearing. I don’t give a damn if the 17-year-old victim happened to smoke a joint every once in awhile, or engaged in the kind of masculine braggadocio that nearly every 17-year-old boy engages in from time to time.

I can tell you this much. If some 29-year-old jackass followed one of my teenage boys down the street, accosted him, demanded to know why my son was walking around in his own neighborhood, then got into some sort of physical altercation with my son … I can tell you, to borrow a phrase from the BBC television show Luther, it would come back on that jackass like the hand of God. I can tell you that with absolute certainty.

Then again, it’s all pretty academic when you know that nothing like that is likely ever to happen to your kid. But it’s not academic for Trayvon Martin’s parents, is it?