Bruce Rauner: The Ghost of Romney Past | VALID | #TWIBnation 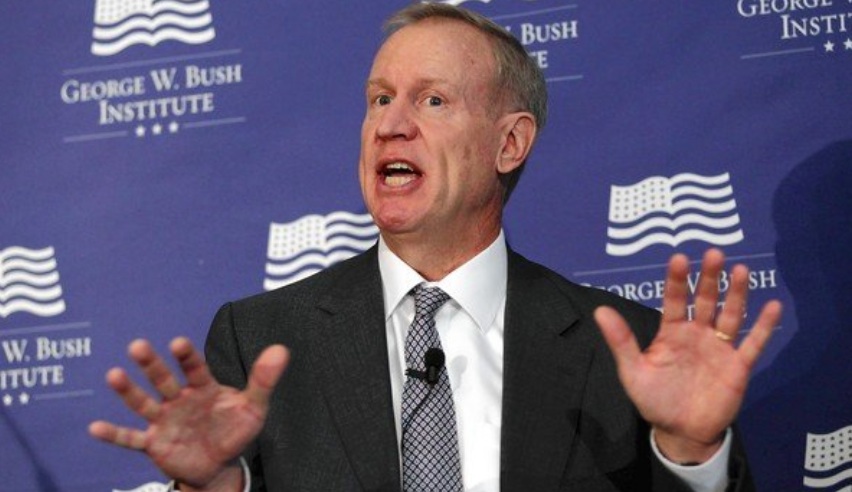 Chicago multimillionaire Bruce Rauner, who wants to be Illinois’ next governor, is not a student of history. Or, at the very least, he’s not a student of recent history. Ignoring the political fiasco that followed Mitt Romney’s infamous “47 percent” speech, Rauner just announced that he wants to reduce Illinois’ minimum wage, which currently stands at $8.25 per hour, to the federally mandated rate of $7.25 per hour. According to Chicagoist:

GOP gubernatorial hopeful and well-known hammerer and shaker Bruce Rauner’s latest idea for economic development in Illinois is to lower the minimum wage, because economic competition means racing fastest to the bottom.

The Alton Daily News reports that while all four GOP hopefuls are against raising the state’s wage, business mogul turned would-be politician Rauner wants to use his “Shake Up Express” to kick things in reverse.

“I will advocate moving the Illinois minimum wage back to the national minimum wage,” said Rauner. “I think we’ve got to be competitive here in Illinois.”

Rauner’s income last year averages out to $204K a day for a five-day work week, or $25,550 every hour for an eight-hour day. It would take a minimum wage employee 399 days to earn as much money as Rauner made in a single hour last year. And, again, that’s before any pay cut.

It would be funny if it wasn’t so tragic. But the fact is, the federal minimum wage is obscenely low – so low, in fact, that no independent adult can actually live on it. And so it imposes an enormous cost on the American tax payer, who might not like paying taxes but is generally unwilling to see his or her fellow Americans starve to death.

Two studies released [October 15, 2013] make some different calculations to determine the total cost to American taxpayers of a large, low-wage workforce. It comes to an average of $7 billion a year. That’s the amount of annual public assistance families of fast-food workers received between 2007 and 2011, according to a new report written by economist Sylvia Allegretto and others, sponsored by the University of California at Berkeley’s Labor Center and the University of Illinois at Urbana-Champaign, and funded by Fast Food Forward, the group that helped organize [last] summer’s labor strikes. The authors used publicly available data.

The report calls out the fast-food industry for its low wages, citing a median salary of $8.69 an hour and a history of offering part-time work. That might have been fine when those behind the counter were mostly teenagers living at home. These days, though, 68 percent of fast-food workers are single or married adults who aren’t in school—and 26 percent are raising children.

Note that those employees, on average, make slightly more than the federal minimum wage. More, even, than the Illinois minimum wage. And yet, they can’t survive without billions of dollars in public assistance. Every year.

So the only thing Rauner’s approach would do is this: It would push the working poor even further into poverty, take money out of the pockets of Illinois consumers, and shift a considerable financial burden from the private sector to the already over-burdened state and federal governments. But that doesn’t matter to a slick politician like Rauner, because he knows slashing the minimum wage is very popular with his base.

Who just happen to be the same folks who voted for Mitt Romney.

Who just happened to have lost Illinois by sixteen percentage points.