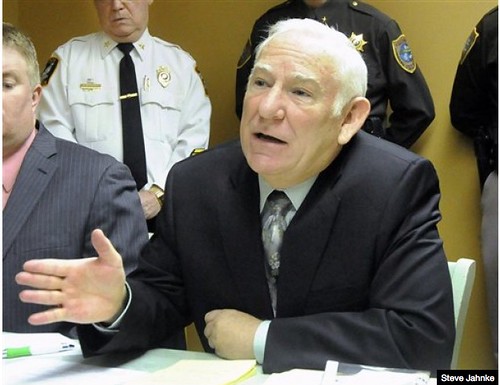 Williamson County is, as its government website says, “located in scenic Southern Illinois.” With a population of roughly 66,000, its main claim to fame is a massive federal penitentiary located in Marion, the county seat.

Unfortunately for the citizens of Williamson County, they may soon be famous for another ignominy: Charles R. Garnati, who was elected State’s Attorney there in 1984 and has held the position ever since, has gotten into hot water with the Illinois Supreme Court’s Attorney Registration and Disciplinary Commission (the “ARDC”) over racially charged comments he made during the 2011 murder trial of Marcus Marshall.

According to a complaint filed by the ARDC in November, Marshall, who is African-American, was accused of shooting LaQuinn Hudson to death in Marion on August 22, 2010. During the course of their investigation, Marion police obtained statements from two witnesses–Jodie Lacey and Crystal Blye, both of whom are likewise African-American–implicating Marshall in Hudson’s murder. Later, however, both Lacey and Blye recanted those statements in a letter to Marshall’s attorney. So, anticipating that the defense would challenge the credibility of Lacey and Blye at trial, Garnati said this in his opening statement to the jury:

And you will see, ladies and gentlemen, that there are some, not all–there are many good people in the black community, but basically you will see that there are a few in the black community who refuse to cooperate with the police even when a murder happens right under their nose, and those people have a habit of intimidating, harassing, sometimes threatening anybody who they think is cooperating with the police. That’s what makes this case so difficult, ladies and gentlemen.

Compounding the problem, Garnati elaborated on this theory in his closing argument, asserting that not merely “a few,” as he stated in his opening, but “most” Black folks are so mistrusting of the police that they are willing to lie to protect a fellow Black person charged with a crime:

Please, you have to keep in the back of your mind how many people in that community feel about law enforcement. You have to understand and keep in mind how they react to the police and to the prosecutors. Sometimes for people like us, that’s hard to understand. People were brought up to believe that the police were their friends; that when something happens, when we are in trouble, that the police are our friends. And that’s where we go to get help from is the police when bad things happen.

But in the black community here in Marion, it’s just the opposite. Most–for whatever reasons, most of these people were raised to believe that the police and prosecutors are the enemy; that for some reason, we are always out to get them. In their mindset, the biggest sin that you could-that you can commit is to be a snitch in the community. The biggest sin that you could commit is to ever cooperate with the police on anything. It’s a sin to even cooperate when one of your own people gets brutally gunned down and is left to bleed to death.

And I am not saying that the whole black community is like that, ladies and gentlemen. There are some very good law[-]abiding citizens in that community here in Marion. But the evidence has shown that again, for whatever reasons, there is an intense dislike and even hatred for the police. And this group of people who feel that way make it extremely hard on the people who are law-abiding and want to do what is right and who are willing to come forward and give information that they have when a crime has been committed . . .

And if that weren’t enough, here’s the icing on the racist cake:

Now, in our white world, ladies and gentlemen, our automatic reaction in that type of situation, if somebody gives a statement to the police and then later on changes their story, the automatic response would be that that person is not trustful and that there is a problem with their credibility.

Oh, did I mention the jury was all white? Yeah, that would explain why Garnati said (ahem), “Now, in our white world, ladies and gentlemen, …”.

In any event, the jury returned a guilty verdict, which, to no one’s surprise, was overturned on appeal due to prosecutorial misconduct. Specifically, the Appellate Court held:

The State’s use of race was an egregious and consistent theme throughout the trial. Even if the prosecutor had made only one reference to race, such reference would fall within a category that our courts have previously found to be plain error. That there were multiple instances of such racial prejudice is all the more reason to warrant a new trial for Marshall. These errors were so substantial that Marshall was denied the right to a fair trial.

People of the State of Illinois v. Marcus Marshall, No. 5-11-0430 (Ill. App. Ct., 5th Dist., slip op. Sept. 13, 2013) (.pdf file). In fact, Garnati’s conduct was so egregious, the state filed a “confession of error” in the Appellate Court–meaning that it conceded that the trial court erred in allowing Garnati to make those statements to the jury, even though defense counsel failed to object at the time.

Now the ARDC seeks to discipline Garnati for violating provisions of the Illinois Rules of Professional Conduct which prohibit “improperly seeking to convict, rather than seeking justice”; the “failure to provide competent representation to a client”; “alluding to any matter [at trial] that the lawyer does not reasonably believe is relevant or that will not be supported by admissible evidence, [or] asserting personal knowledge of facts in issue”; and “conduct which is prejudicial to the administration of justice”.  The ARDC also accuses Garnati of  “engaging in conduct which tends to defeat the administration of justice or to bring the courts or legal profession into disrepute.” (See ARDC Complaint, ¶ 13.) The Complaint does not specify the type of discipline the agency deems appropriate, but, depending on the recommendations of the Hearing Board, that could range from censure to suspension to outright disbarment.

It’s good to know that Marshall’s conviction was thrown out and that Garnati is now being called to answer for his abuse of the criminal justice system. The real question, though, his how often comments like Garnati’s are made in courtrooms all across the country, particularly in remote places like Williamson County, Illinois, when no one is paying close attention.