The Washington NFL Franchise and Sports’ Complicated Past | VALID | #TWIBnation 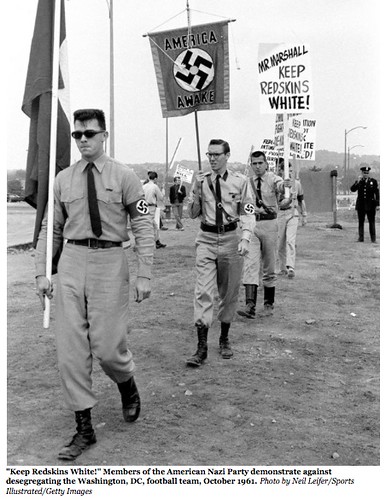 Take my beloved Chicago Cubs. When it came to our city’s major league baseball teams, I grew up in an agnostic household, although my two oldest brothers – Sox fans, of course – swear to this day that the Old Man favored the South-siders over the North. But my parents were scrupulously neutral, baseball-wise, and so I had to learn my baseball theology from that other great figure who loomed large over my childhood: Legendary Chicago Daily News columnist Mike Royko.

Royko, whose daily columns formed the basis of most of our dinnertime conversations when I was growing up, was a dyed-in-the-wool fan of the Chicago National League Ball Club, Inc., otherwise known as the Chicago Cubs. I learned to love this team by reading his frequent essays on the subject – essays that read like love poems and elegies at the same time. When he wrote about the Cubs, there was something pure in it, something both achingly profound and obscenely funny; there was a combination of cynicism and deeply held loyalty that somehow got into my veins, like it chose me rather than me choosing it.

But Royko’s love of our National League franchise, like his understanding of Chicago politics, was first and foremost grounded in realism. Hard, bitter, fatalistic realism. And so it should come as no surprise that in one of his last columns, written, as it turns out, just about a month before his death, he faced the Cubs’ own disturbing past with unflinching honesty. Riffing on the infamous Legend of the Billy Goat Curse, Royko explained:

Yes, blame for many of the Cubs’ failings since 1945 can be placed on a dumb creature.

Not a poor, dumb creature but a rich one.

I’m talking about P.K. Wrigley, head of the chewing gum company and the owner of the Cubs until he died in 1977.

In baseball, what P.K. Wrigley was best known for was preserving day baseball long after all other franchises were playing most of their games at night.

The only other baseball feat he was known for was running the worst franchise in baseball. And a big part of that can be blamed on racism. If not Wrigley’s, then that of the stiffs he hired to run his baseball operation.

[In 1947,] Branch Rickey of the Brooklyn Dodgers knocked down the racial wall in baseball by signing ex-Army officer Jackie Robinson. …

Had Wrigley followed Rickey’s lead, he could instantly have had a competitive team, maybe a great team.

He didn’t. His players had made their feelings clear, voting not to play if the other teams boycotted Robinson. And his team’s front office wouldn’t listen to those who urged them to sign black players.

It wasn’t a momentary hesitation. It was not until September 1953 – nearly seven full seasons after Robinson arrived – that Wrigley signed two black players.

I think about this whenever the subject of any sport’s or sports franchise’s dark past arises, because virtually every sport and every team has such skeletons in its closet. Lord knows my Cubs do.

Most recently, I’m reminded of that quintessential sports truism in connection with the controversy over the racial slur used as the team name for Washington, D.C.’s NFL franchise. The current owner of that franchise, Dan Snyder, has steadfastly refused to consider changing it, insisting that the name “was, and continues to be, a badge of honor.”

That’s nonsense, of course. The name is a racial slur, plain and simple. The fact that the franchise, the NFL, football fans, and sports media have ignored it for decades doesn’t make it any less so. It just makes all of us complicit.

But given that every sports franchise has an unsavory past, shouldn’t we perhaps go easy on Washington’s NFL team? In a word: No.

Because to excuse the Washington team’s racist name on the grounds that everybody’s done vile things is to excuse this (via Indian Country):

A photograph [featured at the top of this post] that was reincarnated by Mother Jones magazine, snapped by Sports Illustrated photographer Neil Leifer back in 1961, shows that Washington’s NFL team was a favorite among American Nazis.

In 1961, a group of men marched with swastikas on their arms in protest of the integration of black players onto Washington’s NFL team. Until then, the D.C. franchise was White Only.

One of the signs they held says, “Mr. Marshall, Keep Redskins White!” At the time, George Preston Marshall’s Redskins were the last all-white team in the NFL. Another sign said, “Integration is not Black And White. It’s Red.”

The point, however, is this. You can make all the semantic arguments you want about Washington’s team name, but you can’t deny the team’s racist history. And while every team in the four major professional sports leagues has a racist past – yes, every team – most of them, including, I suppose, Washington’s NFL team, have made honest efforts to redress that past. Still, Washington’s team clings to this name, an outward symbol of overt racism, as if to say: We may have grudgingly changed our hiring practices, but don’t ever forget that this is a game run by and for the rich and powerful … most of whom are, of course, old white men.

Maybe changing the team’s name would be a mere symbolic gesture after all these years, but keeping it is a symbolic gesture, too. It’s raising a middle finger at those of us who care about America’s racist past and want to overcome it.