Zimmerman Got Arrested With A ‘Stockpile’, Or Something | VALID | #TWIBnation

According to TMZ, police seized a ‘stockpile‘ of five guns from his home, along with over one hundred rounds of ammunition. Apparently, they seized a pocket knife and a ‘religious pendant’ as well; why TMZ felt the need to relay that information is anybody’s guess. 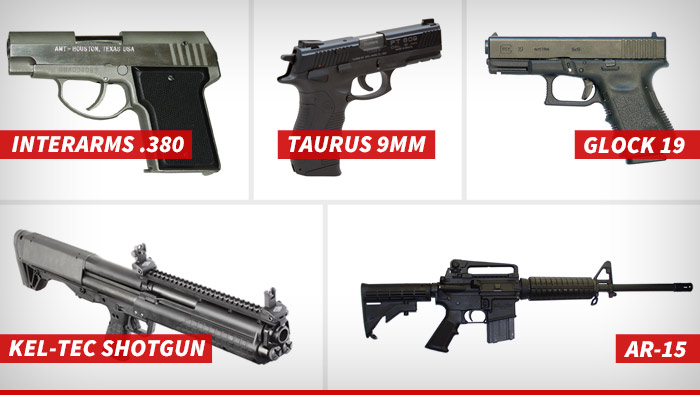 So here’s what Zimbo got arrested with. Looks like a lot, does’t it? But is it, really? Or is he just a lot to deal with? (Image courtesy of TMZ.com)

When I first shared the TMZ article on my Facebook page, one of my colleagues took TMZ to task for their usage of the word ‘stockpile’ in the headline, which was clearly done for linkbait purposes. He claimed that not only is it an easy way to make a scumbag like Zimmerman look even more irredeemable, but it has the added effect of cheaply stoking public outrage to fuel a gun control reform agenda. The truth of the matter is, he’s right on both counts. Tabloid sensationalism has always been used to fuel an agenda. That’s what it’s designed for.

I’ll not deny the intellectual dishonesty at play here; five guns is hardly a weapons ‘stockpile’ by any reasonable standard of objectivity. My dad owns five guns, and enough ammo to have one helluva day at the shooting range. But he also hasn’t been in the headlines lately for shooting unarmed black kids like some kind of wannabe hero cop, either. Also, as a California resident, my father appreciates the social and legal impracticality of owning more guns than can be easily concealed in his home, and is quite discreet about their existence.

Conversely, my uncle in Missouri, with his thirty-some-odd guns ranging from derringers to assault weapons, might very well be considered a different story in the eyes of many. However, he lives on several acres of land in a state where gun laws are considerably more lax. If I recall, he now has a shooting range on his property, where he happily lends his guns to his fellow aficionados when they come over for target practice and amateur competitions.

But both men grew up around guns their entire lives, as hunters and sportsmen, and have immense respect for the power of guns to kill. Neither of them have violent pathologies in any sense of the term, and would never point their guns at a human being in anything other than the most dire of circumstances. In the end, the difference between ‘collection’ and ‘stockpile’ is more a question of intent than number, which is precisely what makes the latter such a contentious term, not to mention effective in stirring up debate and controversy.

Despite that fact, as someone who doesn’t own any guns and fails to see the appeal in doing so, a half dozen guns seems like, well…a lot. Enough to make me feel mildly uneasy when they’re all sitting right in front of me, like when I occasionally accompany my dad to the shooting range. I know what capacity they have to harm, but I also know that the ‘guns don’t kill people, people kill people’ argument has real weight. All the more reason for sensible gun control reform; there are some crazy people out there who have way too easy of a time acquiring weapons because of some pretty gaping loopholes in the system.

Case in point: despite your opinion on Zimmerman’s acquittal in the killing of Trayvon Martin, it’s hard to ignore the man’s numerous brushes with the law since then. This makes the second gun-related domestic dispute he’s been involved in since July, and his penchant for speeding (he’s been pulled over for it no less than three times) makes him just as dangerous behind the wheel as it does behind the trigger. In light of all this, the fact that he still owned even one gun – let alone five – stretches credulity to the limit.

I’m hardly alone in this sentiment. The collective unease of non-gun owners is political capital to be exploited, as is the collective outrage of gun owners who feel that their rights are being threatened. I suppose I’d feel more guilty about it if groups like the NRA and ALEC weren’t doing it as well, especially considering their real aim: advancing a corporate arms trade agenda, both national and international, legitimate and illegitimate.

Arguments about freedom, liberty, or tyranny from on high are little more than a smokescreen, from behind which business interests can be advanced. In terms of intellectual dishonesty, that’s a much graver offense, one that ensures heightened levels of conflict, violence, and destruction will continue unabated, both here and abroad. So while two wrongs certainly don’t make a right, I’d rather lend my support to those who can see the false equivalence.