About That Obstruction Call | VALID | #TWIBnation 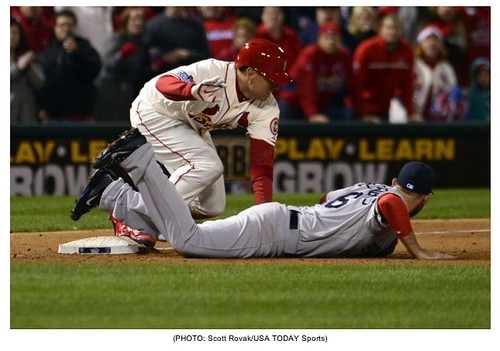 As a Cub fan, it pains me to admit this. Then again, as a Cub fan, I cling to an alternate reality in which Major League Baseball disbanded after Game 7 of the 2003 National League Championship Series. So one might question my judgment.

Nonetheless, the lawyer in me won’t allow this to pass without comment, so here goes: the St. Louis Cardinals legitimately won Game 3 of the World Series this past Saturday night. Which is to say, third base umpire Jim Joyce and home plate umpire Dana DeMuth correctly called obstruction on Red Sox third baseman Will Middlebrooks, allowing the Cardinals’ Allen Craig to score from third.

As you may recall, with one out in the bottom of the ninth inning of a game tied at four, the Cardinals’ John Jay hit a grounder to Red Sox second baseman Dustin Pedroia, who fielded it brilliantly and threw the Cardinals’ Yadier Molina out at home. But Red Sox catcher Jarrod Saltalamacchia, attempting a double play with Craig heading to third, overthrew Middlebrooks, who fell flat diving for the ball. Craig stumbled over Middlebrooks as he headed for home and appeared to be tagged out at the plate. Joyce, however, immediately signaled that Middlebrooks obstructed Craig, and so DeMuth called Craig safe at home, giving the Cardinals a 5-4 victory.

It was a bizarre play all around, but the call was correct. While it doesn’t appear that Middlebrooks intentionally obstructed Craig’s progress toward home, the rule doesn’t require intent. In fact, Major League Baseball’s Rule 2.00 defines “obstruction” this way:

OBSTRUCTION is the act of a fielder who, while not in possession of the ball and not in the act of fielding the ball, impedes the progress of any runner.

(If you’re a baseball geek, or a lawyer, or a geeky lawyer/baseball fan, you can download a .pdf file of Major League Baseball’s Official Rules here.)

All the rule requires is that a fielder do something that happens to impede the progress of the runner (while not in the act of fielding the ball), and that’s obstruction. No intent is required.

So, what happens when a fielder obstructs a base runner? This:

When obstruction occurs, the umpire shall call or signal “Obstruction.”

(a) If a play is being made on the obstructed runner, or if the batter-runner is obstructed before he touches first base, the ball is dead and all runners shall advance, without liability to be put out, to the bases they would have reached, in the umpire’s judgment, if there had been no obstruction. The obstructed runner shall be awarded at least one base beyond the base he had last legally touched before the obstruction. Any preceding runners, forced to advance by the award of bases as the penalty for obstruction, shall advance without liability to be put out.

Or, in plain English, the runner who’s being obstructed gets to take another base.

In the case of Middlebrooks and Craig, there’s no question Middlebrooks tripped Craig as he attempted to round third and head for home. Craig stumbled – or, in baseball parlance, was impeded – by the fielder’s action. So, under the plain language of the rule, the call was the right one: Craig was safe at home.

And as if to underscore the point, the Official Baseball Rules include this comment under the definition of Obstruction:

Rule 2.00 (Obstruction) Comment: If a fielder is about to receive a thrown ball and if the ball is in flight directly toward and near enough to the fielder so he must occupy his position to receive the ball he may be considered “in the act of fielding a ball.” It is entirely up to the judgment of the umpire as to whether a fielder is in the act of fielding a ball. After a fielder has made an attempt to field a ball and missed, he can no longer be in the “act of fielding” the ball. For example: an infielder dives at a ground ball and the ball passes him and he continues to lie on the ground and delays the progress of the runner, he very likely has obstructed the runner.

Damn, son. It’s like they looked into the future and saw Middlebrooks flopping on his belly.

So there you have it. The Cardinals legitimately won Game 3.

Oh, and as for that pick-off play that ended Game 4? I thought Kolten Wong was safe.