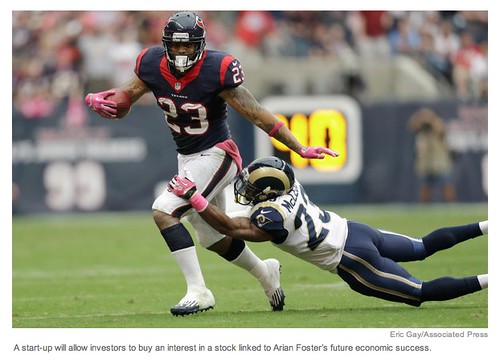 I’m not sure how I feel about this New York Times story, but I’m pretty sure I don’t like the headline: “Want a Piece of a Star Athlete? Now, You Can Really Buy One.” Naturally, the story features a prominent image of Houston Texans running back Arian Foster, who’s African American. Foster’s potential earnings are the subject of the story, so the image makes sense. But, still.

The story itself, though, is fascinating:

On Thursday, Fantex Holdings will announce the opening of a marketplace for investors to buy and sell interests in professional athletes. The start-up, backed by prominent executives from Silicon Valley, Wall Street and the sports world, plans to create stocks tied to the value and performance of an athlete’s brand.

It will have its debut with an initial public offering for a minority stake in Arian Foster, the Pro Bowl running back of the Houston Texans. Buying shares in the deal will give investors an interest in a stock linked to Mr. Foster’s future economic success, which includes the value of his playing contracts, endorsements and appearance fees.

Buck French, the company’s co-founder and chief executive, said Fantex hoped to sign additional players in football and other sports, as well as expand into other talent areas like pop singers and Hollywood actors.

I suppose you can invest in anything that has the potential to make (or lose) money, but this is unusual to say the least. Regarding the Foster deal in particular, the Times article explains that Fantex Holdings will roll out an initial public offering of $10.5 million – “representing a 20 percent interest in Mr. Foster’s future brand income” – at $10.00 per share. Assuming the IPO is successful, Foster will net $10 million upfront and the rest will go to cover the cost of the deal.

After the IPO, holders of the shares will be able to buy and sell them, with Fantex acting as a stock exchange. “Presumably,” the Times muses, “the tracking stock will increase in value if Mr. Foster raises his earnings potential with standout on-the-field performance or increased corporate sponsorships.” In reality, if an athlete’s “stock” functions like shares of publicly traded companies, future share value may have nothing whatsoever to do with actual financial performance. It’s not hard to imagine investors paying a premium to “own” a piece of a celebrity athlete just to say they “own” a piece of him or her, much like the way certain investors want to own stock in companies they have an affinity for – say, Apple Computer, or, back in the early 2000s, Krispy Kreme Doughnuts. Yes, owning shares of Krispy Kreme Doughnuts was a thing once.

But the Times’ rather unfortunate headline notwithstanding, nobody’s actually buying or selling a portion of Arian Foster himself. It’s difficult to know precisely how the deal will be structured without seeing the specific offering documents, but I assume either Fantex or Foster has set up some sort of entity (a corporation, LLC, joint venture, limited partnership, etc.) which will hold twenty percent of Foster’s earnings now and in the future, and that’s the pot of money shareholders are investing in. Of course, this raises more questions than it answers: What assurances do investors have that twenty percent of his future earnings will actually be transferred to that entity? Can Foster’s personal creditors reach the funds held there? Will Foster himself have any access to those funds? Will the fund be liquidated at some point?

More than that, though, the whole thing makes me a little uneasy. The very idea of “owning” a piece of an athlete is unsettling – even though, rationally, I know that’s not actually what’s going on here. Like the Times’ headline itself, the concept evokes images of slavery, albeit highly paid slavery; and, perhaps more to the point, avid sports fans already have a fairly entitled worldview to begin with. That is to say, true sports fanatics already think they own the athletes who play on their favorite teams. So, I can only imagine how much more demanding and unreasonable they’ll be once they have a real financial stake in an athlete’s performance.