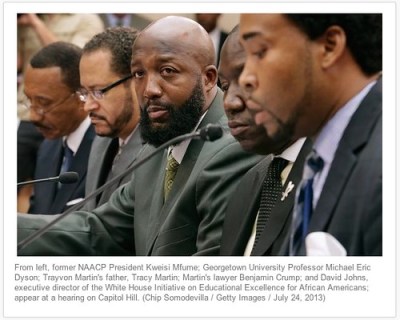 Apparently, I was too easy on Dana Loesch and her fellow right-wing hucksters when I wrote this piece about their latest canard – that the people who protested the George Zimmerman verdict really don’t care about urban violence in places like Chicago, which claims entirely too many lives, mostly of young black people. “Where are the riots? Where are the protests,” Loesch asked; to which I responded: There are protests against urban violence in Chicago nearly every week. But you’re not really all that concerned about the deaths of young black people, are you?

Tracy Martin, the father of slain Florida teenager Trayvon Martin, urged Congress on Wednesday to improve the educational and employment opportunities of African American boys and men, who are disproportionately imprisoned and unemployed.

Martin, who recently started an anti-gun-violence foundation with Trayvon’s mother, Sybrina Fulton, said President Obama’s impromptu remarks Friday, during which he shared his own experiences with racial stereotypes, “spark[ed] a conversation in every household.”

Martin attended a meeting on the issues facing black boys and men organized by Democrat Eleanor Holmes Norton, the District of Columbia’s delegate to Congress, and Rep. Danny K. Davis (D-Ill.), co-chairs of the Congressional Caucus on Black Men and Boys.

Panelists spoke of the need to improve access to early childhood education and job training for all young people, and particularly black and Latino males.

So here you have Tracy Martin, Sybrina Fulton, and their allies on Capitol Hill doing precisely the opposite of what Loesch and other conservatives allege: They’re using Trayvon’s death as a springboard to a broader discussion about issues facing young people of color, including the plague of urban violence.

And then there’s this story from MSNBC about Rep. Robin Kelly (D-Ill.) and other prominent black leaders from Chicago taking on the city’s murder problem directly:

After a particularly bloody Fourth of July weekend [in Chicago], in which 72 people were shot, 12 of them killed, Kelly and a couple of fellow local Democratic members of Congress have convened an “emergency summit” to address the issue of gun violence facing Chicago and so many other cities across the country. The two-day “National Summit on Violence in Urban Communities,” hosted by the Congressional Black Caucus, will begin on Friday at the Chicago State University Convocation Center in Chicago.

Speakers and attendees from all over the city, region and country are expected to attend, including members of law enforcement, the clergy, politicians, community leaders and victims of gun violence. Panelists will discuss what approaches have and have not worked. And organizers hope to glean practical strategies that could be applied in Chicago and in other struggling communities.

The “fellow local Democratic members of Congress,” by the way, are Rep. Danny Davis and Rep. Bobby Rush, both of whom, like Robin Kelly, have been vocal in their support for Trayvon Martin and their concern over the Zimmerman verdict.

So, again, here are prominent black liberals, all of whom have taken a stand on the Zimmerman case, turning their attention to all of the issues facing young people of color, and working toward positive solutions that will reduce the violence that plagues Chicago and other cities.

Now, why do you suppose Loesch, et al., ignore those efforts? Perhaps its because they don’t want to draw attention to what folks like Tracy Martin and Robin Kelly are actually saying. Because Martin and Kelly are talking about things like the scourge of guns and the need for better education and job training, which, of course, require that the government be part of the solution – all things that conservatives like Dana Loesch would rather you not think about.

Indeed, I’m quite sure that Loesch doesn’t want to draw attention to these comments from Rep. Kelly:

“On the federal level I’m disappointed. When 90% of America wants universal background checks and we can’t pass it, it’s absolutely ridiculous,” she said.

Missing from the broader gun safety debate are voices from urban America, Kelly said, where the burden of gun violence weighs most heavily.

And I’m sure Loesch doesn’t want to draw attention to the fact that the murder rate in Chicago skyrocketed after the Supreme Court struck down the city’s ban on handguns (after nearly two decades of steady declines with the handgun ban in place). Because that most certainly doesn’t fit the conservative narrative, now does it?

No, the Loesch crowd is happy to bash Chicago, happy to bash African American leaders, happy to bash liberals in general. They just don’t want to confront the inconvenient truths about urban violence and what black leaders and their allies are trying to do about it.

Gee, it’s almost like the Loesch crowd doesn’t want the problem to go away.