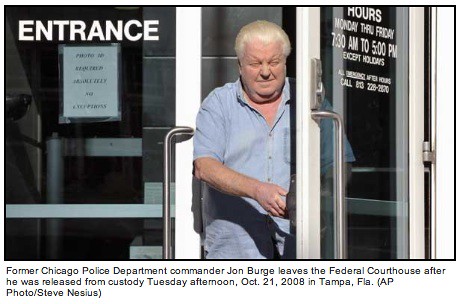 The cynic in me wants to say it’s too little too late. After all, I grew up with images of Chicago’s Finest wielding nightsticks from behind plastic shields, and the young men on the business end of those nightstick usually looked an awful lot like my older brothers and their friends. So, trust in local law enforcement is not something that comes easy to me.

But when the Chicago City Council meets Wednesday evening, it will do something that, as far as I know, no other government entity, local, state or federal, has done to redress police abuse and torture. Via Chicago’s ABC affiliate, WLS-TV:

The proposed ordinance calls for setting aside $20 million for victims of police torture. That is the same amount of money the city spent defending police torture cases.

This follows Mayor Emanuel’s decision last month to stop fighting “credible” cases arising out of years of abuse by Burge’s men at Chicago’s Area 2 police headquarters in the 1970s and 1980s. As many as 100 people claim to have been tortured by Burge and officers under his command, although the city denies that all of those claims are “credible.”

Still, the city’s recent actions are a significant departure from the approach taken by Mayor Emanuel’s predecessor, Richard M. Daley. Daley not only defended claims against the city arising out of the Burge teams’ abuse, he was implicated in at least one civil lawsuit, Michael Tillman v. Jon Burge, et al., No. 10 C 4551 (U.S. Dist. Ct., N.D. Ill.), for his conduct both as Cook County State’s Attorney and as Mayor. A 2011 opinion by U.S. District Judge Rebecca R. Pallmeyer explains the basis of the Tillman suit this way:

Plaintiff alleges that as Mayor and State’s Attorney, Defendant Richard Daley had personal knowledge of the alleged abuses perpetrated by Burge and other Defendants at Area 2, but declined to investigate the abuses and failed to disclose these exculpatory allegations. Plaintiff asserts that, had Daley and Martin investigated the allegations of abuse at Area 2 prior to his arrest, he would not have been tortured and would not have been wrongfully convicted. Plaintiff further alleges that as a result of a conspiracy between Daley, [former Police Superintendent LeRoy] Martin, [former Police Superintendent Terry] Hillard, [former Superintendent’s Aide Thomas] Needham, [former Office of Professional Standards Director Gayle] Shines and others to suppress information about torture at Area 2, “Plaintiff’s wrongful prosecution was continued, his exoneration was delayed and his imprisonment lasted far longer than it otherwise would have.” According to Plaintiff, between 1989 and 1992, Daley and Martin were given “additional actual notice that Burge was the leader of a group of Chicago detectives that systematically tortured and abused African-American suspects” through an Amnesty International report and public hearings. Plaintiff alleges that in 1996, despite his knowledge that findings of torture and abuse had been made against Defendant Dignan, Daley promoted Dignan to lieutenant. Plaintiff also alleges that Daley, against the advice of his senior advisers, “personally insisted” throughout his tenure that the City of Chicago “continue to finance the defense of Burge, Byrne, Dignan, and other Area 2 detectives, despite his personal knowledge that Burge committed acts of torture.”

As for Burge, he’s serving a 4 1/2 year prison sentence in North Carolina for perjury and obstruction of justice, the statute of limitations for torture having run out before federal criminal chargers were brought against him.

In any event, it’s refreshing to see the city of Chicago acknowledge, and, to some extent, atone for its history of torture and abuse. Wouldn’t it be nice if the federal government would do the same?