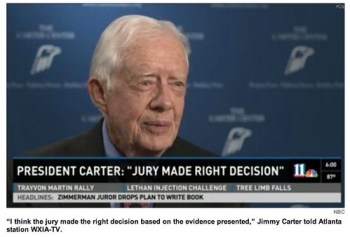 Clearly, ex-presidents need to listen to me. As I mentioned in an earlier post, maybe right now isn’t the best time to tell people they should just accept the not guilty verdict in George Zimmerman’s second degree murder trial. But, does Jimmy Carter take my advice? Nooo.

According to Talking Points Memo:

Former President Jimmy Carter on Tuesday weighed in on the murder trial of George Zimmerman, saying the “jury made the right decision” in acquitting the neighborhood watch volunteer of all charges in the shooting death of unarmed teenager Trayvon Martin.

“I think the jury made the right decision based in the evidence presented because the prosecution inadvertently set the standard so high that the jury had to be convinced that it was a deliberate act by Zimmerman and that he was not defending himself and so forth,” Carter told television station WXIA in Atlanta. “It’s not a moral question, it’s a legal question and the American law requires that the jury listens to the evidence presented.”

Actually, I mention this not so much to chastise the ex-president but to point out something that should be clear by now: There are no perfect liberals.

This seems to be a hard concept for some of our friends on the left to grasp. And by some of them, I mean, in particular, young white liberals who freak out every time President Obama deviates slightly from our preferred political orthodoxy — which he does from time to time.

See, to young white liberals, Jimmy Carter is one of those paragons of ideological purity – a guy who’s right on everything, all the time. And by right, of course, I mean left. As in, liberal. But here’s Jimmy Carter doing the unthinkable: Arguing that the George Zimmerman jury got it right. How could he let us down like that? How could he not be, you  know, pure and right and good and liberal … just like us?

In fact, if you take a close look at Jimmy Carter’s presidency, you’ll see that he was far from liberal – far from pure – a good part of the time. Young white liberals today might be shocked to learn that the Carter Administration indirectly supported genocidal maniac Pol Pot after the Vietnamese invaded Cambodia and ousted him in 1979:

“I encouraged the Chinese to support Pol Pot,” said Zbigniew Brzezinski, President Carter’s national security adviser. “The question was how to help the Cambodian people. Pol Pot was an abomination. We could never support him, but China could.” So U.S. help was forwarded to the Khmer Rouge through China.

President Carter also continued the long American tradition of supporting Iran’s murderous and dictatorial Mohammed Reza Shah Pahlavi. Even after the Shah was deposed and the U.S. was reaching out to the secular provisional government in Tehran, President Carter made an enormous political and moral blunder by allowing the Shah entry into the United States for medical treatment, unwittingly bolstering the political fortunes of Ayatollah Ruhollah Khomeini. Khomeini, who was “pressing for adoption of a new constitution that would permanently enshrine the concept of an Islamic Republic,” had been facing increasing resistance from other factions within the revolution; but he used the ensuing hostage crisis to gin up support for theocracy. The rest, as they say, is history.

Then there are Jimmy Carter’s post-presidential lapses, from his support for Henry Hyde’s efforts to repeal the War Powers Act in 1995, to his ill-conceived defense of ex-Food Network star Paula Deen, to the current dust-up over the George Zimmerman verdict. The point is, liberal icon Jimmy Carter, like everyone else, is fallible.

No doubt, Carter’s fans on the left – especially those wide-eyed young white liberals who often cite him as the elder statesman of liberal purity – will rush in to say, given all the good he’s done, we have to give him a pass for the Deen and Zimmerman faux pas, at the very least. And I can see that (although … Pol Pot? The Shah of Iran? Really?). But I wonder why the standard you apply to Jimmy Carter allows for some mistakes – including fairly major ones – when the standard you apply to President Obama allows for none.