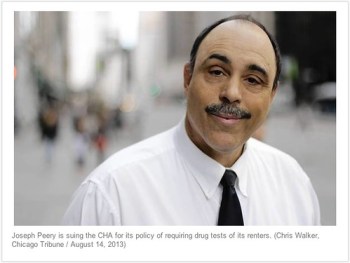 Despite the nearly constant furor over NSA surveillance, I’ve always said that you’re far more likely to have your rights trammeled by state and local authorities than the federal government. And here’s a case in point, via the Chicago Tribune:

A Chicago man who objects to having to submit to drug testing as a condition of living in an apartment that he rents from the Chicago Housing Authority filed a lawsuit Thursday challenging the policy in federal court.

Joseph Peery, 58, has lived in the Parkside of Old Town mixed-income housing development on the Near North Side since 2010. Drug tests are required of all renters before they move into the complex and every year on renewal of a rental agreement, Peery said.

“It’s humiliating, embarrassing, stigmatizing, and it’s unfair,” Peery said in an interview. “I think it needs to end.”

The American Civil Liberties Union of Illinois took up Peery’s case and filed a class action lawsuit against the CHA.

For clarification, the development where Peery lives is run by a private company, not directly by the CHA. It has some CHA residents, like Peery, and some individuals who rent directly from the private management company. All of the residents are required to submit to drug testing, not just those who have CHA leases. Moreover, it’s the management company, not the CHA, that imposed the drug testing requirement.

Nonetheless, the CHA owns the land on which the development sits, and CHA residents like Peery have leases directly with the CHA, not the management company. And:

Adam Schwartz, a senior lawyer at the ACLU of Illinois, said the Parkside policy and those at other mixed-income developments are clearly aimed at CHA renters.

“The reason they’re doing this is because of the stigma of the CHA renters,” he said. “If they weren’t trying to get the CHA renters, they wouldn’t be doing it to any renters.”

Schwartz said that CHA acts as the “ultimate decider” on policies imposed by the housing manager.

“If the CHA does not want a criteria, the criteria doesn’t go in,” he said. “It takes CHA action to impose this policy.”

The Tribune also notes that, according Michigan State University Law Prof. Brian Gilmore, an expert on public housing law, no other housing authority in the country allows for drug testing in this manner.

I hope Mr. Peery’s lawsuit is successful. I also hope that NSA-obsessed civil libertarians start to pay more attention to cases like this.