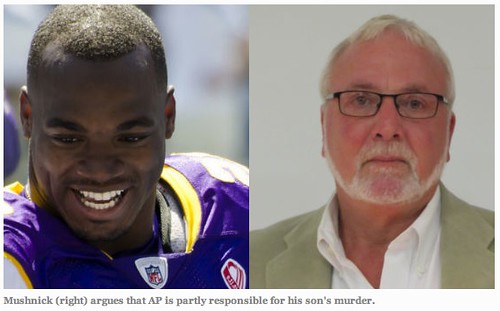 In the annals of dad shaming, this may go down in history as the most gratuitous and ill-timed example the world has ever seen. Just days after Minnesota Vikings’ running back Adrian Peterson lost his two-year-old son, Ty, to a brutal murder, New York Post columnist Phil Mushnick wrote an article in which he placed some of the blame on Peterson himself. No, really.

The New York Post‘s Phil Mushnick is no stranger to controversy. But he outdid himself with his Sunday column about Adrian Peterson’s “secret” son, which media observers are calling “possibly [the] worst column ever” and “the most offensive sports column in the history of Earth.”

(Hat-tip to my Twitter pal @DAbitty, an avowed Vikings fan, for linking to Rupar’s article.)

Rupar’s piece walks through each of Mushnick’s “arguments” in support of his dubious premise, and they’re just as absurd as you might imagine. First, Mushnick asserts that Peterson isn’t blameless because he’s had a few minor run-ins with the law – specifically, a speeding ticket and an incident in a nightclub where Peterson and some friends allegedly refused to leave at closing time. As to the former, Mushnick asserts that it’s “doubly disturbing” because Peterson’s “older, full brother was killed by a reckless driver.” Yes, his “full” brother, because you know those Black folks and their strange half-relations. Jesus H. Christ.

But, anyway – as if I actually have to say this aloud – none of that has anything to do with the fact that the man lost his son to a brutal murder.

Mushnick then criticizes Peterson for playing in Sunday’s game against the Carolina Panthers, arguing that a good father would have “take[n] off a day or two from work.” Really, jackass? You know what else a decent person ought to “take … a day or two” off of? Attacking a grieving father over the death of his son. Who are you to tell Adrian Peterson, or anybody else, how to deal with that kind of grief? Maybe being around his teammates and running full-speed into an opposing defensive line was exactly what he needed at that particular moment. I don’t presume to know what’s best for Adrian Peterson, because I never lost a kid to a senseless murder.

But here’s the real kicker. As Rupar explains, the gist of Mushnick’s argument is this:

[O]f course, Mushnick can’t resist taking a shot at Peterson for being an absentee father, even though, as we’ve reported, the identity of Ty’s father wasn’t clear for some time after the child was born:

The suspect in the beating murder of Peterson’s 2-year-old is the boyfriend of Peterson’s “baby mama” – now the casual, flippant, detestable and common buzz-phrase for absentee, wham-bam fatherhood.

Mushnick then argues Peterson was indirectly responsible for Ty’s death because he didn’t spend more of his considerable wealth ensuring the child and his mother were living in a safe home. . . .

Right. You know those Black guys and their baby mamas. Except, of course, we don’t really know anything about Adrian Peterson’s relationship with Ty or Ty’s mother – other than the fact that, as Rupar notes, Peterson rushed to the Sioux Falls hospital where Ty was being treated as soon as he learned about the incident.

More to the point, though, I doubt I’ve ever read anything more informed by stereotypes and racism than Mushnick’s latest tripe. Who gives a damn if Peterson has had run-ins with the law, or failed to grieve in precisely the same manner in which a rich, white New York Post columnist would grieve, or – gasp! – had a child out of wedlock. The kid’s dead, murdered in cold blood, and nobody has a right to question the extent to which Adrian Peterson is grieving for that little boy . . . or the right to lay blame on Peterson just because he’s not freaking Ozzie Nelson.