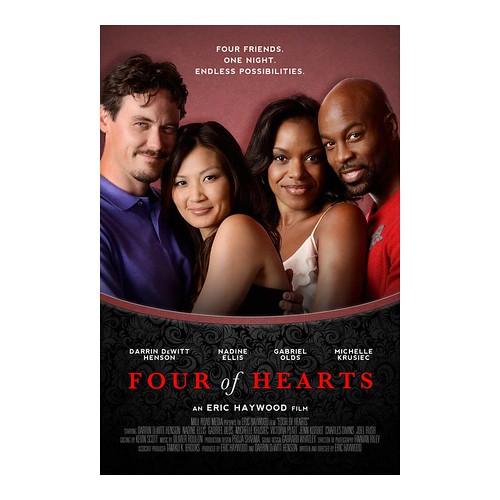 My wife and I recently attended a screening of Eric Haywood’s new film, Four of Hearts, at the Gene Siskel Film Center in Chicago. Four of Hearts stars Darrin Dewitt Henson (Soul Food: The Series, Stomp the Yard) and Nadine Ellis (Let’s Stay Together, Reno 911!) as Derrick and April, a successful African-American couple facing a potential crisis after about a year of marriage.

The film opens with Derrick and April frankly discussing their six-month sexual dry spell, a byproduct of hectic lives and the demands of work and school, as they head to meet Robin, their real estate agent, played by Victoria Gabrielle Platt (Guiding Light, ’Round Midnight). From there, Derrick and April meet their friends Christy and Matt, played by Michelle Krusiec (Fringe) and Gabriel Olds (Boardwalk Empire), who are swingers and are quite open about it. This leads to the central conflict of the film – April first suggests, and Derrick eventually agrees, to approach Christy and Matt about a foursome, which has the intended effect of spicing up Derrick’s and April’s marriage, but, as you might expect, leads to some unintended difficulties between them.

What strikes me most about Four of Hearts is its honesty. The characters and the film are completely open about sex, love, relationships, and jealousy, in a way that’s refreshingly mature. It’s an “adult” film, not in a salacious way, but in the way that it addresses real problems that real adults face in their relationships. There are no explicit scenes in Four of Hearts. Instead, most of the film involves Derrick and April working through their emotions after the two couples’ sexual encounter.

I sat down with Eric to discuss Four of Hearts and his experiences in television and film. Here is the first part of that interview:

Can you give us a brief synopsis of your background?

I was born and raised in Milwaukee. I went to college at the University of Wisconsin-Milwaukee where I got a bachelor’s degree in film production. My original goal was to write and direct feature films, but because I didn’t have any rich relatives and I didn’t have any connections in the movie business, I decided I would get my start by directing music videos. I started directing music videos while I was still an undergrad. I relocated to Atlanta in 1994, because Atlanta was sort of the booming music town at the time.

That was the golden age of hip-hop music videos, too, right?

Exactly. I did videos for people like KRS-One and Too $hort and a lot of people who were really big in the mid to late ’90s. In my spare time I was writing film scripts, just trying to sharpen my skills, and at one point a script that I had written began to get some attention out here in Los Angeles. So I moved to LA, and it took several years for that film to work its way through the Hollywood pipeline, but along the way it ended up getting me a job writing for Soul Food. That’s where I began to fall in love with the idea of being a TV writer. From there, I went on to write for a short-lived cop drama on NBC called Hawaii. Then the script that I came out to Hollywood with got bought by the Hallmark Channel, called Relative Stranger, and that film was made starring Eriq LaSalle and Cecily Tyson.

Then I got hired for Private Practice. Right before I started on Private Practice, I realized that I had been in LA for a number of years, I wasn’t getting any younger, and I wanted to get back to my original goal, my original reason, for coming out here. So, I buckled down and I wrote Four of Hearts, I self-financed it, and we shot it here in fourteen days.

Films made by people who got their start in music videos oftentimes look a lot like music videos, but this really doesn’t. This is much more of a human story. How did you accomplish that?

My original goal was to write features, and doing music videos was a way to gain production experience and make a living. So, I always saw myself, and still do, as a storyteller first and foremost. So when it came time to make the film, there was a very deliberate decision to not do what I call show-off with the camera, which, I agree, I think a lot of music video and commercial directors tend to do when they make their first feature. I always intended it to be all about the story and the characters, and I didn’t feel the need to lean on camera tricks or lighting tricks in order to tell the story.

The film dialog is so genuine; there’s nothing that’s forced or fake about it. Does writing for television help in that process?

I think it definitely helps, because you’re constantly sharpening your skills. Those scripts get constantly rewritten. Even when you’re pitching an idea in the writers’ room on a TV show, you can’t be too married to an idea. The idea that serves the story best wins. So when it came time to write Four of Hearts, it was all a matter of wanting the characters to feel authentic, as opposed to making the dialogue feel overwritten or contrived; and I knew that the way I intended the cast this film, I didn’t want anything to interfere with the performances that I was planning on pulling out of my actors. So, I tried to stand back and let the story unfold in a way that felt as naturalistic as possible.

Although it’s serious subject matter and there’s a lot of drama in the film, there’s also a fair amount of humor. How structured was that, inserting humor into the script?

As far as things like facial expressions and gestures go, I attribute those things to the actors. Everybody really brought their A game. We had no rehearsal time. As a matter of fact, we didn’t cast Michelle, who plays Christy, until the Friday before our first day of shooting, which was a Sunday. So, things came together totally last minute, but because they’re all experienced professionals, you know, they got it. They knew what was called for. They knew where to find their comedic moments.

As far as the writing goes, there was definitely a conscious decision to mix in comedic moments. Not set-up, punchline type of humor, but just finding the humor in the reality of the situation. Dialogue-wise, we didn’t really deviate from the script too much, so it was pretty well structured. I wanted the movie to be a fun ride. I didn’t want it to be melodramatic, with a bunch of angry people yelling at one another.

[Part Two of my interview with Eric will be posted next week.]