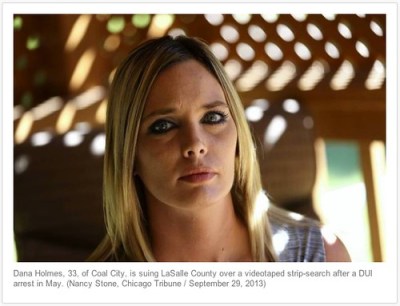 It’s a fact of life in the United States that you’re far more likely to have your civil liberties trammelled by state and local authorities than by the federal government. Sure, the feds may engage in questionable electronic surveillance, which means that there’s a remote possibility some dark-suited gentleman somewhere in Washington may happen upon an email you wrote to your great aunt on her 90th birthday, or that Google search you did that you swear was only for legitimate research purposes . . .

But they’re not likely to sexually assault you.

I’m referring to this story out of LaSalle County, Illinois, from the Chicago Tribune:

The attorney for a woman who alleged she was forcibly stripped by LaSalle County deputies after a DUI arrest last spring said other women have come forward claiming similar conduct, and he has asked a federal judge to bar destruction of potential video evidence.

“We have reason to believe there are other women who have been illegally strip-searched by the sheriff’s office,” attorney Terry Ekl said Monday.

Ekl’s client, Dana Holmes of Coal City, cited jailhouse video last week in a lawsuit against LaSalle County authorities. Holmes, a 33-year-old convenience store clerk, alleged the sheriff’s department and four deputies violated her civil rights and caused her emotional harm by stripping her naked without legal justification for such a search.

Arrested for drunken driving late May 18, Holmes was stripped hours later by four sheriff’s deputies — three men and a woman — after an altercation during a pat-down search. A sheriff’s incident report said Holmes was uncooperative while being searched.

Just so we’re clear, there’s no doubt that Ms. Holmes was strip-searched by three men and a woman. It was caught on video. And as the Tribune story points out, the search clearly was illegal under Illinois law. Specifically, Section 103-1 of the Illinois Code of Criminal Procedure provides:

(c)       No person arrested for a traffic, regulatory or misdemeanor offense, except in cases involving weapons or a controlled substance, shall be strip searched unless there is reasonable belief that the individual is concealing a weapon or controlled substance.

(e)       All strip searches conducted under this Section shall be performed by persons of the same sex as the arrested person and on premises where the search cannot be observed by persons not physically conducting the search.

Illinois law also requires any officer conducting a strip search to first “[o]btain the written permission of the police commander or an agent thereof designated for the purposes of authorizing a strip search in accordance with this Section.” 725 ILCS 5/103-1(f)(1). At this point, it’s not clear that the officers involved did so. But more to the point, it’s hard to believe that the officers had a “reasonable belief that [Ms. Holmes] [was] concealing a weapon or controlled substance” when the officers’ report merely says she was “uncooperative,” and, in any event, the involvement of male officers clearly violates the law.

And when I say “violates the law,” I’m not simply talking about violating the victim’s civil liberties. Depending on the circumstances, the male officers involved in this case might be guilty of what Illinois law calls “criminal sexual abuse,” which includes “commit[ting] an act of sexual conduct by the use of force or threat of force.” 720 ILCS 5/12-15(a)(1). Because the law defines “sexual conduct” to mean “any knowing touching or fondling by the victim or the accused, either directly or through clothing, of the sex organs, anus, or breast of the victim or the accused, . . .  for the purpose of sexual gratification or arousal of the victim or the accused,” 720 ILCS 5/11-0.1 (emphasis supplied), it may be impossible to prove in Ms. Holmes’ case. But let’s just say I have my suspicions about the officers’ real motives. If they weren’t doing for “sexual gratification,” they sure seemed to be doing it in order to humiliate her in the most gratuitous way possible.

But don’t worry, kids. The guardians of civil liberties will continue to rage-blog about the NSA and Edward Snowden and (ahem) possible rapist Julian Assange. So, as long as you’re not a woman who gets arrested in LaSalle County, Illinois, you should be just fine.