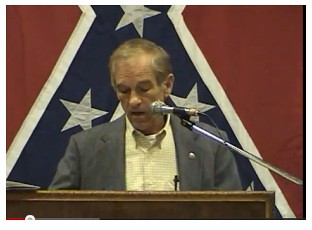 We have to accept Ron Paul’s foibles, we are told, because he’s the only one talking about important issues like civil liberties and American interventionism abroad. Hey, man. Nobody’s perfect. But at least he’s right on the NSA and the “war on terror.” Indeed, no less a hero that Julian Assange recently said that “the libertarian section of the Republican party” is “[t]he only hope” for American politics, and that he’s “a big admirer of Ron Paul and Rand Paul for their very principled positions in the U.S. Congress on a number of issues.”

I keep asking myself, though, at what point do Ron Paul’s foibles dwarf the handful of issues on which he’s more or less correct? Because things like this keep happening (via the Southern Poverty Law Center’s Hatewatch blog):

[W]hat do a far-right Italian politician, the president of the John Birch Society and former U.S. Rep. Ron Paul have in common?

In early September, the men are all scheduled to speak – along with a lengthy list of archconservative clergy, lawyers and academics – at a conference in Canada sponsored by the Fatima Center, part of the “radical traditionalist Catholic” movement, perhaps the single largest group of hard-core anti-Semites in North America.

Paul, the former Texas congressman and Republican presidential candidate, is the keynote speaker of the weeklong conference slated for Sept. 8-13 in Niagara Falls, Ontario.

This, of course, isn’t the first time Ron Paul waded into the murky waters of hate. In 2008, James Kirchick wrote a detailed piece in The Atlantic regarding Paul’s pre-internet-era newsletters, which contained viciously racist, anti-Semitic, and homophobic content along with a healthy dose of “patriot” movement paranoia. Daily Kos diarist phenry has another collection of gems from Paul’s newsletters, here.

Hard-core Paulistas, of course, insist that their hero did not personally author the offending commentaries, and Paul himself denied any responsibility, telling CNN in 2008 “that he didn’t write any of the offensive articles and has ‘no idea’ who did”:

Paul said he had never even read the articles with the racist comments.

Unfortunately, Paul’s former secretary, Renae Hathaway, tells a different story: “It was his newsletter, and it was under his name, so he always got to see the final product. … He would proof it.” In fact, when the issue originally surfaced, Paul didn’t actually deny writing or approving the offending content. To the contrary, Think Progress chronicled at least five separate instances in the 1990s in which Paul not only failed to deny responsibility for the content of those newsletters, but actually endorsed it.

As Kirchick points out:

[W]hoever actually wrote them, the newsletters I saw all had one thing in common: They were published under a banner containing Paul’s name, and the articles (except for one special edition of a newsletter that contained the byline of another writer) seem designed to create the impression that they were written by him — and reflected his views. What they reveal are decades worth of obsession with conspiracies, sympathy for the right-wing militia movement, and deeply held bigotry against blacks, Jews, and gays. In short, they suggest that Ron Paul is not the plain-speaking antiwar activist his supporters believe they are backing — but rather a member in good standing of some of the oldest and ugliest traditions in American politics.

And so here we are again. After decades of first not denying, and then vehemently denying, responsibility for the racist, anti-Semitic, homophobic, and downright paranoid content of his newsletters, good old Ron Paul resurfaces just in time to speak at a “traditionalist Catholic” conference that’s designed to be, as Hatewatch quotes its press release, “a call … to a return to sanity in the government of the world and the Church, for the two cannot be separated,” along with such delightful folks as:

Roberto Fiore, an Italian politician, who … was described by a fellow member of the body as “absolutely the most extreme person who has ever served in the European Parliament.”

John F. McManus, the president of the archconservative John Birch Society (JBS) … [which] has been dogged for decades by charges of anti-Semitism, accusations society leaders vehemently deny.

E. Michael Jones, the South Bend, Ind.-based editor of Culture Wars magazine … [whose] cover stories have included “Judaizing: Then and Now,” “The Judaism of Hitler,” and “Shylock Comes to Notre Dame.”

In an article raging about a new president of Notre Dame University several years ago, Jones charged that anyone who went to a mainstream university would emerge “with a Jewish world view … and maybe a Jewish spouse.”

That’s an all-star lineup of hate.

But it brings me back to my original question. If this is who Ron Paul is, and it’s readily apparent that it is, why do liberals keep defending him, as if he were the only person on the planet speaking out against the NSA, or the “war on terror,” or America’s ridiculous drug policies? He’s not, of course. It’s just that a lot of people on the left have spent the past five years or so promoting Ron Paul and wasting valuable time and energy defending the indefensible – yes, Ron Paul is a racist, and most likely an anti-Semite, too – while ignoring virtually every other non-racist, non-anti-Semitic, pro-civil-liberties, anti-war liberal out there.