The Definition of Badass | VALID | #TWIBnation 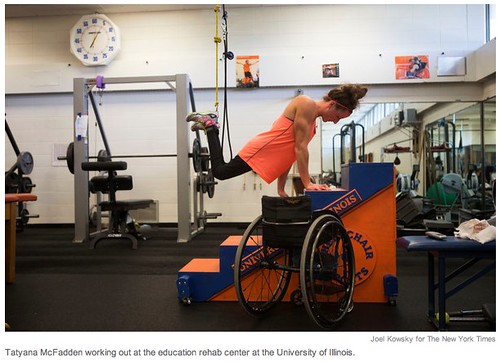 If you’re familiar with athletics at my alma mater, the University of Illinois in Urbana-Champaign, names like Dick Butkus, Ray Nitschke, and Harold “Red” Grange are likely to come to mind. If you’re a die-hard fan of the Orange and Blue, you’re likely to add names like Deron Williams, Nick Anderson, Howard Griffith, and Simeon Rice to that list. But you may not know that the University of Illinois has produced some of the greatest paralympians and disabled athletes of all time.

As runners and wheelchair athletes from around the world prepare to toe the starting line for the thirty-sixth running of the Chicago Marathon this Sunday, Tatyana McFadden continues that tradition. From the New York Times:

McFadden, a 24-year-old senior [at the University of Illinois], was born with spina bifida, which left her paralyzed from the waist down. She arrived on campus as a decorated sprinter, and she has twelve medals — three gold — from the last three Paralympic Games, in Athens, Beijing, and London.

Now she is one of the world’s leading long-distance wheelchair athletes, having won the Boston Marathon and the London Marathon this year. When she races in the Chicago Marathon on Sunday, she will attempt to become the first person — able-bodied or disabled — to win three major marathons in the same year.

And here’s the part of the story I love – and maybe hate, just a little. She competed in her first marathon in 2009, when her coach, Adam Bleakney, persuaded her to sign up for Chicago. She’d never competed in races longer than 800 meters – roughly half a mile – before the 2009 Chicago Marathon. Nonetheless, she won the women’s wheelchair division that year.

She won the first marathon she attempted. Holy hell.

Actually, that’s not altogether surprising, given the struggles she’s overcome in her life:

McFadden grew up in an orphanage in St. Petersburg [Russia], where she was never given a wheelchair. She spent her first six years walking on her hands before Deborah McFadden, then the director of the International Children’s Alliance, adopted her during an overseas trip. After taking to sports in her childhood, Tatyana McFadden fought through the courts in high school in Maryland to compete against able-bodied runners.

When McFadden arrived from Russia, she used a phrase that meant “I can do it myself,” Deborah McFadden said. “And that’s just what she’s done. She’s never been afraid to try anything.”

Bleakney pointed to McFadden’s body as part of the explanation for how she can excel in such a variety of events. She has a long torso and long arms and is very light in her legs. Then there is her well-developed musculature, which was probably helped by the years of walking on her hands, Bleakney said.

“For me, the days at the orphanage were as much about finding mental strength as physical strength,” McFadden said. “It may have helped my arms and shoulders, but it also taught me that I was always going to find a way to do something.”

Oh, yeah. One more thing. Last year, McFadden decided to take up cross-country skiing. By January, she was competing for the United States in the Nordic Skiing World Cup, and she plans to compete at the Paralympics in Russia next year.

I like to think of myself as a marathon runner, albeit an occasional one. The first piece I wrote for This Week in Blackness was about the terrorist attack at the Boston Marathon and my own experiences running marathons in Chicago. I’d also like to think I have one more in me, maybe next spring’s Illinois Marathon in Urbana-Champaign. But I could run a hundred more – maybe a thousand – and I’d never be one one-hundredth the athlete Tatyana McFadden is on her worst day.

Goddammit, I love this sport.