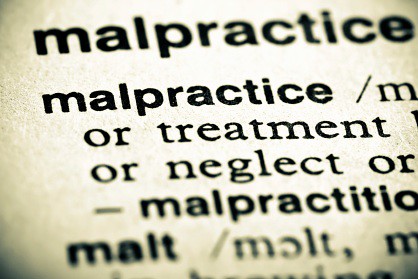 The next time someone mentions “tort reform,” ponder this: According to a recent study, medical errors might be the third leading cause of death in America. Scientific American explains:

In 1999, the Institute of Medicine published the famous “To Err Is Human” report, which dropped a bombshell on the medical community by reporting that up to 98,000 people a year die because of mistakes in hospitals. The number was initially disputed, but is now widely accepted by doctors and hospital officials – and quoted ubiquitously in the media.

In 2010, the Office of Inspector General for Health and Human Services said that bad hospital care contributed to the deaths of 180,000 patients in Medicare alone in a given year.

Now comes a study in the current issue of the Journal of Patient Safety that says the numbers may be much higher – between 210,000 and 440,000 patients each year who go to the hospital for care suffer some type of preventable harm that contributes to their death, the study says.

That would make medical errors the third-leading cause of death in America, behind heart disease, which is the first, and cancer, which is second.

The new study was conducted by John T. James, a NASA toxicologist. Moreover, according to Scientific American, “ProPublica asked three prominent patient safety researchers to review James’s study . . . and all said his methods and findings were credible.”

While studies like James’s and the 2010 report of Health and Human Services’ Inspector General pass under the media’s radar, political leaders, spurred on by lobbyists from the medical industry, continually promote the canard that medical malpractice lawsuits are out of control and impose undue costs on the healthcare system. It’s an argument that’s been debunked time and time again, but it never seems to go away. Writing at Slate in 2006, for example, Ezra Klein summarized a key Harvard Medical School study that was integral to Tom Baker’s 2005 book, The Medical Malpractice Myth:

The Harvard researchers took a huge sample of 31,000 medical records, dating from the mid-1980s, and had them evaluated by practicing doctors and nurses, the professionals most likely to be sympathetic to the demands of the doctor’s office and operating room. The records went through multiple rounds of evaluation, and a finding of negligence was made only if two doctors, working independently, separately reached that conclusion. Even with this conservative methodology, the study found that doctors were injuring one out of every 25 patients—and that only 4 percent of these injured patients sued.

Klein points out that a more recent study by Harvard and the Brigham and Women’s Hospital in Boston went even further. Examining more that 1,400 medical malpractice lawsuits, that study determined that 90% showed real evidence of malpractice, and:

When baseless medical malpractice suits were brought, the study further found, the courts efficiently threw them out. Only six of the cases in which the researchers couldn’t detect injury received even token compensation. Of those in which an injury resulted from treatment, but evidence of error was uncertain, 145 out of 515 received compensation.  Indeed, a bigger problem was that 236 cases were thrown out of court despite evidence of injury and error to patients by physicians. The other approximately 1,050 cases, in the research team’s opinion, were decided correctly, with damage awards going to the injured and dismissal foiling the frivolous suits.

So the supposed medical malpractice litigation “crisis” is a farce. What isn’t a farce is the very real epidemic of actual malpractice in the American healthcare system.

Meanwhile, politicians and their friends in the medical industry continue to promote a “solution” to the phony crisis that will likely make the real one much worse. That’s because the primary emphasis of so-called medical malpractice “reform” is to place limits on the amount and the types of damages injured patients can receive when they sue. Think about that for a moment, particularly in light of the information published by Scientific American today: Actual medical malpractice – that is to say, injuries caused by doctors violating the standard of care established by the medical profession itself – causes between 210,000 and 440,000 deaths per year, third only to heart disease and cancer as the leading cause of death in America. Yet, rather than devoting the resources necessary to root out malpractice and save lives, our political leaders are trying to protect the wrongdoers by limiting the amount of damages they face when they’re sued for wrongdoing.

That, my friends, is the very definition of madness.