When the Blackhawks Visit the White House | VALID | #TWIBnation 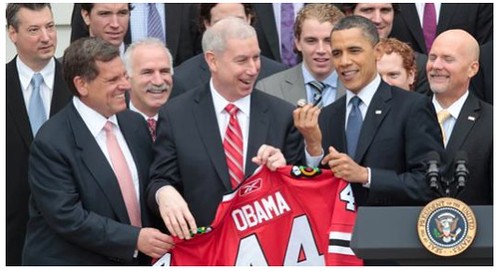 I was about to refer to it, somewhat apologetically, as a guilty pleasure, but it’s not. Hockey, in fact, is awesome. It’s a lot like soccer, only with fore-checking. And they play it on ice – which, when you think about it, is completely insane – and that makes it unbelievably fast-paced, frenetic, and, unlike soccer … exciting.

But hockey is … how shall I put this delicately? … an almost exclusively white sport. Wikipedia lists 27 current NHL players who are of Black African descent, most of whom are from Canada, out of a total of 690 players (23 players per team times 30 teams in the League). And while I can’t cite statistical evidence of this, my perception of the fan base is the same.

So I’m both excited and, shall we say, trepidatious (yes, that’s a word), for this:

The Chicago Blackhawks will meet with President Barack Obama at the White House in Washington D.C. to be honored for their 2013 Stanley Cup championship on Monday, the White House announced on Tuesday.

The Blackhawks will meet with President Obama at 2 p.m. EST.

President Obama, who still owns a house in Chicago and is a known Chicago sports fan, appeared to enjoy the Blackhawks’ visit in 2011 as much as the team.

It should, of course, be routine, almost prosaic. Championship teams generally earn a visit to the White House. It’s one of the perks of winning a championship. It’s not a political event; it’s a celebration of the team and the city it hails from.

Nonetheless, in these absurdly divisive times it’s not that simple. When the Boston Bruins won the Stanley Cup in 2011, goalie and Conn-Smythe Trophy winner Tim Thomas skipped his team’s visit to the White House. His reason?

In a statement on his Facebook page, Thomas explained his choice, saying: “I believe the Federal government has grown out of control, threatening the Rights, Liberties, and Property of the People.”

Right. Because Pres. Obama, unlike, you know, every other president ever, is “threatening the Rights, Liberties, and Property of the People.” I’m sure that was Mr. Thomas’ only concern.

Actually, the President has suffered worse indignities than that. When the Blackhawks visited the White House after their 2010 Stanley Cup championship – the team’s first since 1961 – Pres. Obama graciously said, “Now, we have hosted a lot of teams at the White House over the last two years, but this one is a little sweeter … because it is the first time as President I get to say congratulations on bringing a world championship to my hometown, the city of Chicago.” What he didn’t say was this: During that year’s Cup Final, he had considered attending a game at the United Center but was persuaded not to, due, in no small part, to the uncertain reception that might have greeted him there.

Let that sink in for a moment. The President of the United States, an avid sports fan, wants to see his hometown team play for a championship in their home arena, but can’t because the crowd might turn unruly. It would have been no greater security risk than, say, attending the Washington Nationals’ home opener that same year, but it wasn’t the security risk that dissuaded the White House. It was the potential for an almost exclusively white crowd to heap abuse on the country’s first African American president during a championship game in an almost exclusively white sport.

Of course, that same crowd would cheer like mad when another African American home-town product, Dustin Byfuglien, scored two huge goals in Game 5 of the 2010 Final, but that’s different. Byfuglien’s an athlete; he didn’t presume to be the leader of the free world.

When it comes to this year’s White House visit, players and coaches have every right to snub the president for whatever reasons they choose, political or otherwise. Indeed, Michael Jordan famously blew off Pres. George H.W. Bush after the Bulls won their first championship in 1991. But I hope the Blackhawks take a page from Mike Ditka, once a potential political rival of the president, who gladly attended a White House celebration honoring the 25th anniversary of the Bears’ Super Bowl XX championship. Despite his political leanings, The Coach was downright charming:

“I think it’s a great gesture on behalf of this administration to do it,” Ditka said. “There are a lot of other administrations that had an opportunity to do it and chose not to do it. I think this was done for the right reason—to honor a great football team and a great group of guys.”

That’s what events like this ought to be. Indeed, that’s what sports in general ought to be: An opportunity to heal divisions and celebrate athletic achievement.

I love these Blackhawks and I love the sport of hockey. What I don’t love is the baggage that comes with it. When the Blackhawks visit Pres. Obama next week, they’ll have an opportunity to shed some of that baggage.